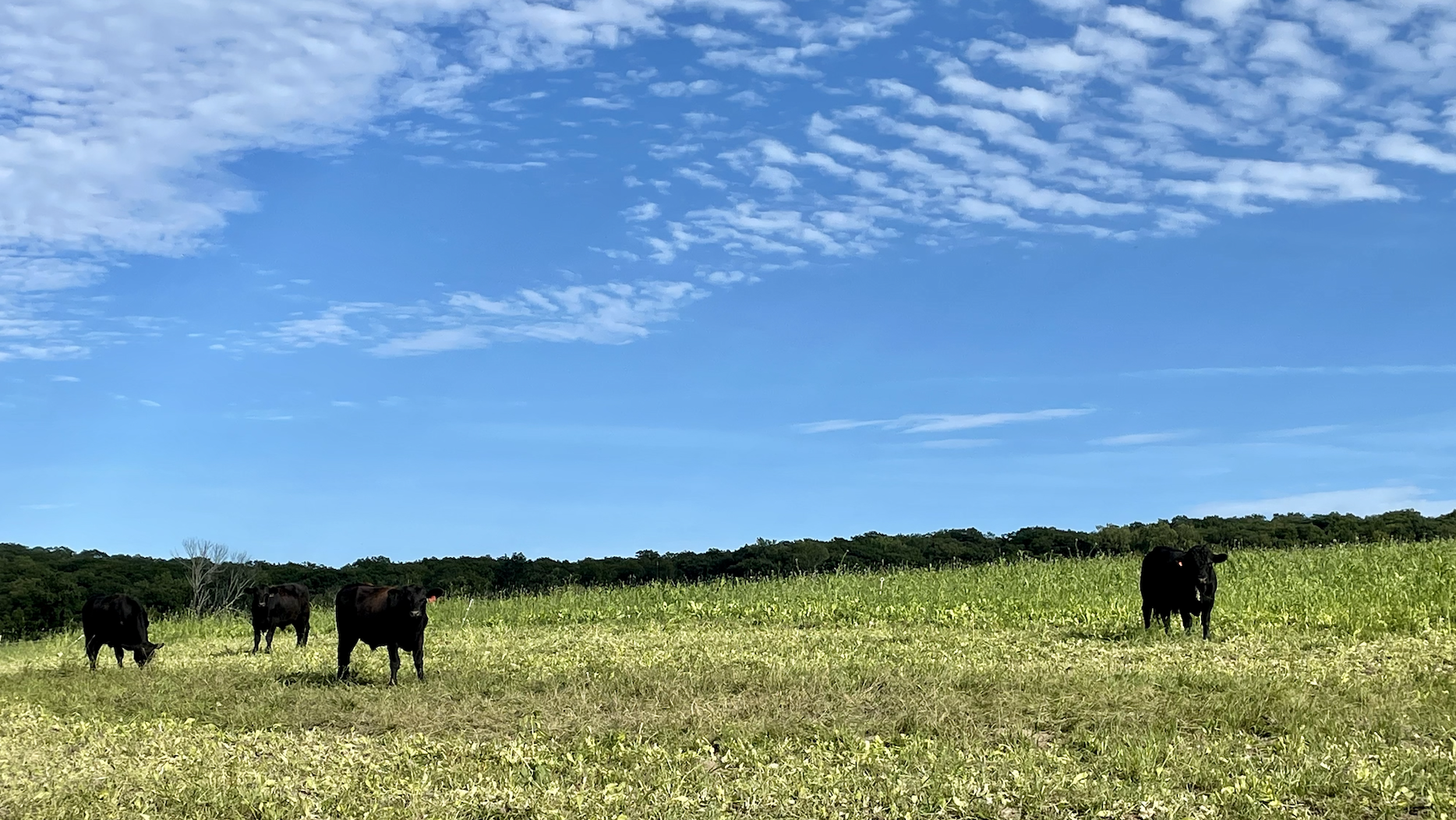 In this series of posts, Glynwood’s Field Operator, Mathew Ball, and Farm Manager, Nicole Scott, will share their progress as they attempt to improve soil health in Glynwood’s 70 acres of pasture. If you missed it, you can read the first installment in this series here.

Last month I introduced you to the decision to “renovate” the seven-acre Middle Field pasture here at Glynwood, and to the methods we are using to implement this overall improvement. We terminated the existing perennial stand of grasses, legumes, and forbs via moldboard plow and disk harrow in May and seeded a warm-season annual plant mix in mid June. This was the first step in a process to remove unwanted species like Russian knapweed and yellow nutsedge, and to ultimately replace the existing stand with more desirable perennial pasture species for our ruminants. In addition to the tillage and replanting sequence, establishing a long-term stand of perennial herbaceous plants will involve improving water movement and percolation, improving soil nutrition and organic matter, and continued intensive management with livestock.

Already we find ourselves in the middle of August. It has been a wild-weather ride this spring and summer, beginning with droughty spells early on and interspersed with heavy bursts of moisture. In the Hudson Highlands, July brought bouts of several day stretches of intense heat as well as an abnormally large amount of rainfall coupled with cool overcast. Between six and seven inches of rain fell at Glynwood in July compared with the usual July average of three to four inches (further north in parts of Dutchess, Columbia, and Berkshire counties, July rainfall totals reached more than 15 inches!).

The July weather meant that planting did not pop as quickly as we would expect these heat-loving, drought-tolerant plants like millet, sorghum sudan grass, and cowpea to do. We did get seeds in the ground slightly late due to some wet May weather, hence wet soils, which foiled our initial tillage window. The seeding would probably have benefited from those extra two weeks in early June. Under “normal '' mid-summer weather conditions, when the cool-season perennials crawl or halt in growth, this planting of heat-loving annuals would have ensured quality fresh forage for the cattle. In the end, it did not prove to be as critical for that purpose, as the rest of our perennial pastures remained green and growing well.

Last week, we finally turned our group of yearling cattle out into the knee-to-waist-high sea of vivid green. The animals appeared to really dig it! This is a relief because this feedstock is an abrupt change from the cool-season perennials our herds are accustomed to. This group moves as a unit and it is a great pleasure to watch them tightly move through the forage, intently munching and slowing to ruminate for a while. We are allowing them to graze relatively close to the ground as we are not concerned with the regrowth and regeneration of this plant mix—this will also aid in the disk harrowing before the next seeding. It is fun to see the tops of daikon radish chomped, the remaining taproot lodged in the soil. (Because of their large taproots, radishes such as daikon are helpful in loosening compacted soils and adding nitrogen as the tuber decays over time. Their greens are also choice forage for livestock.)

As the animals move from paddock to paddock (demarcated by a single strand of temporary electric fence line), I am following with an application of horse manure and wood shaving bedding from our neighbors at Topfield Equestrian Center as a readily available source of nitrogen and longer release of carbon. By the beginning of September, when the cattle will have moved on to another pasture, I will disk in the plant residue and manure and after a short digestion period, I will re-seed Middle Field with a cool-season annual plant mix which will establish this fall and hold the soil over the dormant months. It will be a bit of a gamble, as some of the species in this next mix are historically proven to overwinter in our climate and others are not, but adapting to short- and long-term condition changes is what farming is all about. I look forward to continuing this process and will be sure to update you about how things are going next month!