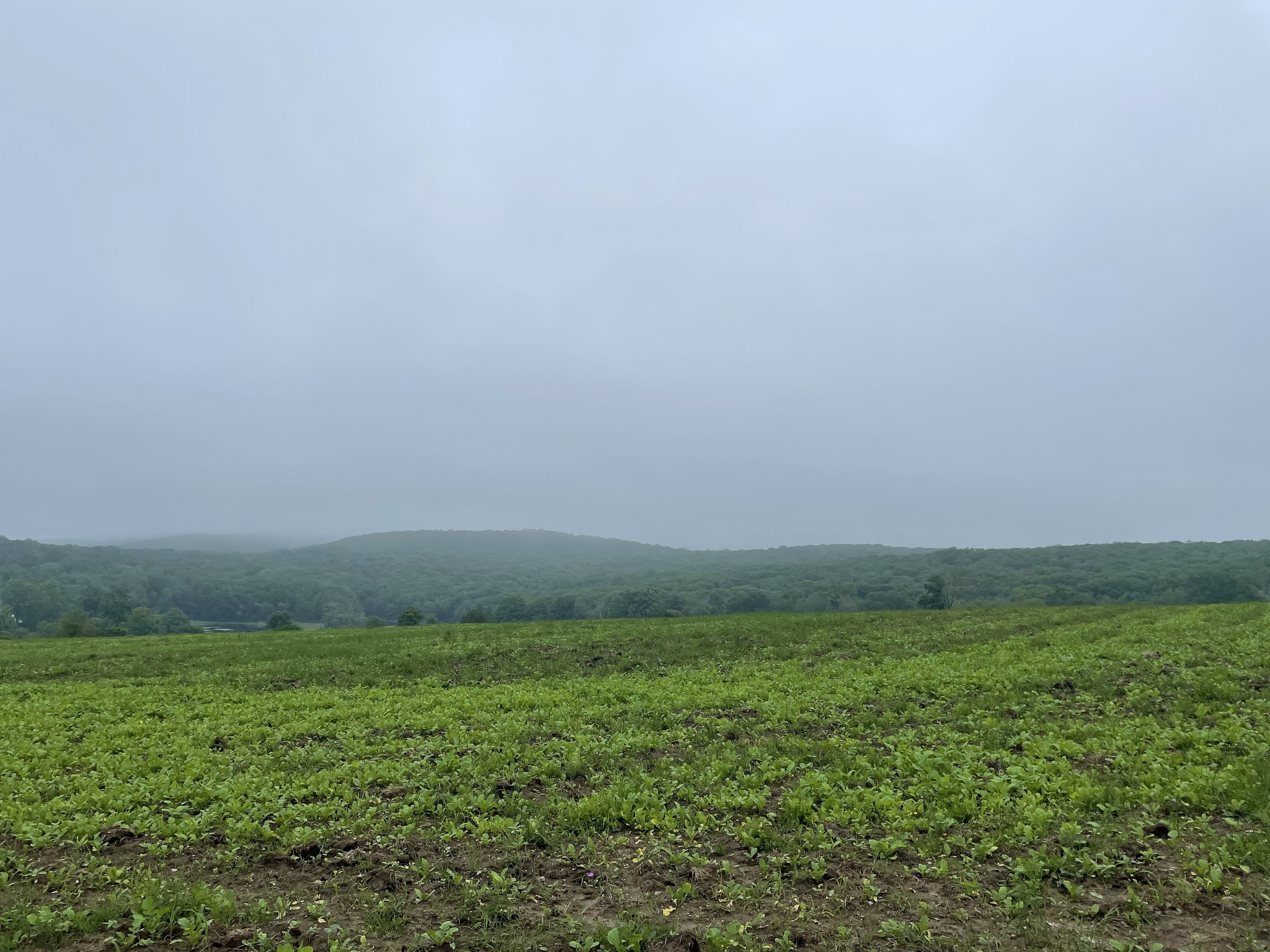 In this series of posts, Glynwood’s Field Operator, Matthew Ball, and Farm Manger, Nicole Scott, will share their progress as they attempt to improve soil health in Glynwood’s 70 acres of pasture.

Here at Glynwood we are grass farming on hilltops that were uneven-aged forest for thousands of years (the Laurentide ice sheet receded about 20,000 years ago)—dotted with ponds, beaver meadows, windthrow, burn-over, and ephemeral slash-and-burn forest gardens—until European colonizers forcibly displaced the Munsee-Lenape and other indigenous groups and imposed market-based agriculture and timber/mineral extraction on the landscape. With this legacy in mind, restoring soil health through the practice of thoughtful grazing is arguably one of the best ways we can tend to this land specifically, as well as so much other land in the Hudson Valley and beyond.

Managing livestock, particularly ruminants, is about actively managing plants—mainly grass, legumes, and other forage forbs. In a perennial plant grazing system, appropriate animal stocking, timing, and level of impact are critical factors in influencing plant composition and density, water movement, and soil nutrient balancing. Generally, short, intense impacts with long rests between create the results we are looking for. Nicole Scott, Farm Manager for Livestock is Glynwood’s grazier. As she has come to intimately know this farm and its discrete pastures, she has come to know their unique personalities—their plant communities, their water retention, their soil, their generosity, their struggles. One particular eight acre pasture, aptly named Middle Field, has been noticeably decreasing in desirable species for ruminant fodder.  Russian knapweed has proliferated and “out-competed” more favorable and palatable species for cattle and sheep. We know that the heavy, clay-rich soil of Middle Field is compacted due to a number of reasons giving an advantage to the tap-rooted, allelopathic knapweed.

Before this grazing season got underway, we decided Middle Field needed an intervention. But how to transition it to the plant community we desire—a diverse mix of cool season perennial grasses, legumes, and forbs? With ample time and very intensive grazing under ideal animal stocking and mechanical management, we could likely get there without tillage. We could also jump start the succession with a series of intense disturbances: termination tillage and short-term successive plantings.  Termination tillage means we plow and disc harrow  the existing perennial mix of plants and disc harrow successive annual plantings. Given our currently small herd and flock sizes, we are currently undertaking the latter course of action. Here’s what this looks like in practice. We plowed and disk harrowed the field in May and seeded a diverse warm season annual plant mix in June. We plan to graze animals in late July to early August, disc harrow up again and plant a cool season annual mix in late August or early September for extended cover and a late fall grazing. We will finally plant Middle Field to a diverse cool-season grazing mix the following spring. And at some point after the perennial stand establishes we will keyline plow to improve drainage and limit surface runoff. This disturbance regime, along with continued intensive grazing management, will reset Middle Field for the long term.

As Field Operator at Glynwood, I am charged with implementing this disturbance, this plant succession, this pasture renovation. It feels big and powerful. In a time when no-till carries hope and expectations for repairing some of agriculture’s negative climate impacts, it feels heavy. When I ripped open and turned that eight acres of sod last month, I exposed decades of soil carbon building and caused it to react with oxygen to form carbon-dioxide which exhaled into the atmosphere. I also put aerobic biological activity into hyperdrive. However, these sacrifices will help us to grow better forage and meat, and store more carbon into the future. So, is renovating pasture by ways of termination tillage a net positive? I think I am privileged as a farmer to be able to ask this question, but I also think it is essential to ask. In my view, it is the best option for Middle Field at Glynwood now and we came to it with thoughtful and critical consideration. In the coming months, I will continue to  share the progress of this renovation - stay tuned.