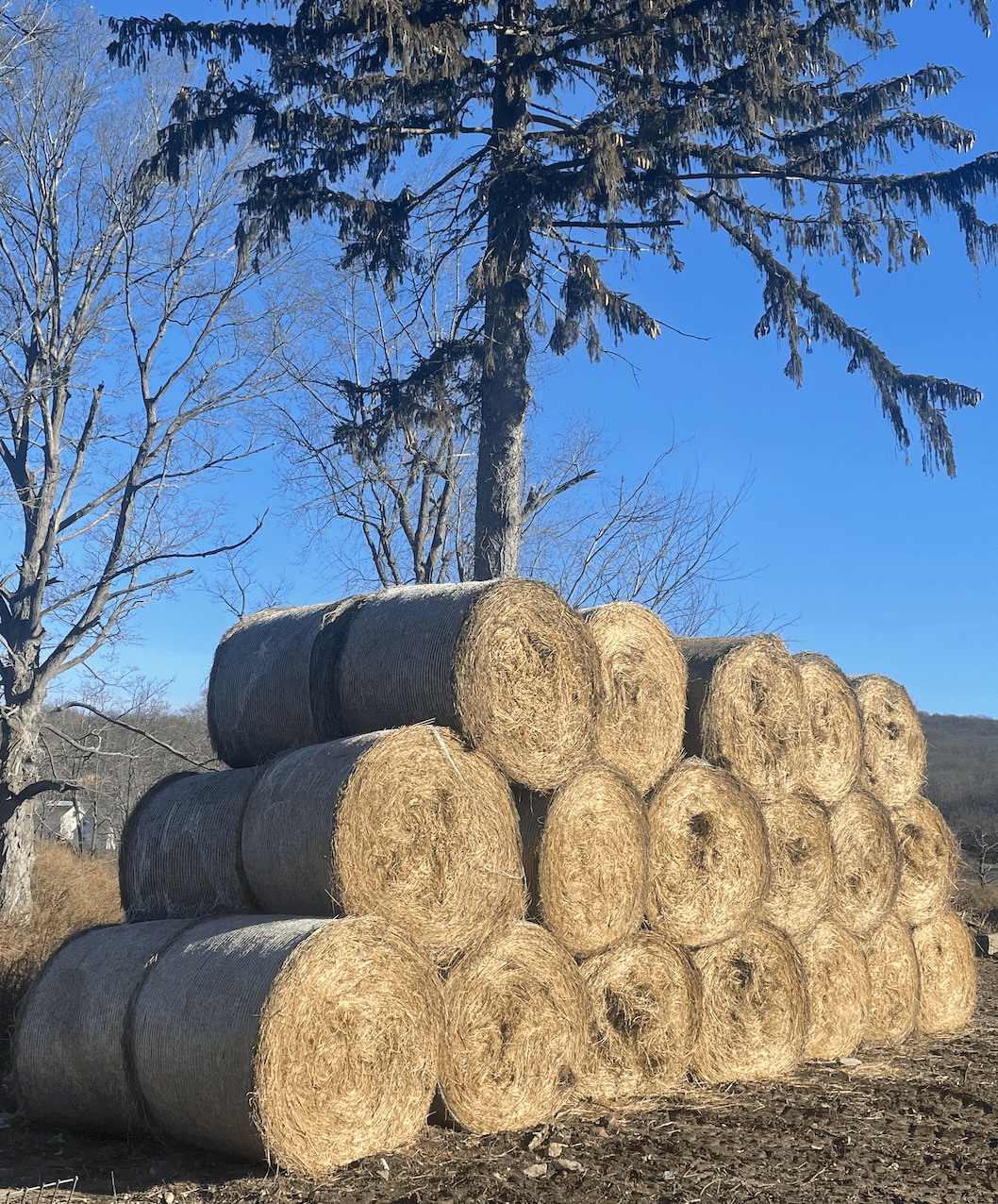 Notes from the Field: Systems of Storing and Handling Hay

Hay for livestock may not be as cut and dry as you think. Making hay in the summer requires great skill and care so that it can then be stored in quality condition through the winter. Throughout the Northeast, including on our small farm at Glynwood, a great deal of the winter is spent thinking about when, where and how to deliver hay to the animals.

Last summer, in the midst of the grazing season here at Glynwood, we began a process to renovate one of our large pastures. We documented the process in the first few installments of this “Notes from the Field” blog series throughout July (here), August (here) and September (here). In November, we transitioned our livestock from grazing on pasture to eating hay. Even though the pastures are now quieter and our cattle and sheep are eating hay, the process of storing and distributing feed to the livestock still requires careful consideration and a lot of work.

Hay was not always neatly packaged, nor were bales always as varied in size and shape as they are today. Prior to the 1860s when mechanized, horse-drawn mowers came into use, hay was entirely cut by hand using a scythe. All hay was gathered and stored “loose” in stacks either in the field or barn. It was not until the 1930s that hay balers and small square bales became commercially available to farmers.

Today we are met with similar challenges that farmers throughout time have faced, including  how to produce hay efficiently and safely, and how to store it through the winter. Contemporary farmers have many hay options. There are numerous sizes, shapes, and binding materials available. The small square bale is perhaps the most ubiquitously known. At 40 to 80 pounds, these small bales can be picked up and moved from one place to another by hand. With the advent of large machinery and larger acreage that haymakers cover, large bales have become just as common. Large format bales can weigh between 600 and 1,500 pounds, therefore requiring heavy machines with specialized attachments—commonly tractors or skid-steer loaders—in order to move them. The hay in these bales is bound by twine, wire, plastic netting, or plastic wrap.

The size and weight of bales has transformed winter work from human scale to machine scale for many farmers and it has also influenced storage methods and barn design. Historically, the Euro-centric barn was designed around the dairy cow in cold climates. It was common for people to live either above or to the side of their livestock within the same building—a great utility of body heat and space! The classic red and white barns we see around the Northeastern U.S. usually accommodated a small milk-cow herd in the lower level and a large hay mow or loft above. This large cavernous space allowed for well ventilated hay storage for loose hay or small square bales. The hay could then be dropped down to the dairy cows below. Gravity can be a good helper to a farmer. Large format hay cannot easily be stored in the lofts of these old barns. This has led to more simply constructed quonset huts, sheds and pole barns to be used for hay storage. However, due to storage constraints, it is not uncommon for farmers to leave the dense hay bales, especially rounds, uncovered and out in the elements. Because they are so tightly bound, water will only penetrate the outer several inches. Unfortunately, a lot of animal fodder can be lost this way. Baleage (high moisture, fermented hay) solves indoor storage constraints because the bales are wrapped in plastic, therefore impervious to the elements.

Here at Glynwood, the livestock team stores and handles hay bales in many forms: small square bales, large round bales and large square bales, both out of choice and necessity. It is advantageous for us to have hay in various formats to be versatile in where and how we distribute the hay to the sheep and cattle. We can be nimble regardless of where the animals are (in the field or in the barn) and what people power and machine power is available.

We currently do not make hay at Glynwood. It is a difficult cost-benefit analysis to determine whether it makes sense to make one’s own hay, and the rationale one way or the other will be different for every farm and farmer. Factors include capital investment and maintenance of machinery, the volatile hay market and weather conditions, the importation value of carbon and other nutrients to the farm via hay, and available pasture land throughout the season.  Hay is a critical consideration when assessing how to take best care of ourselves, soil and animals.