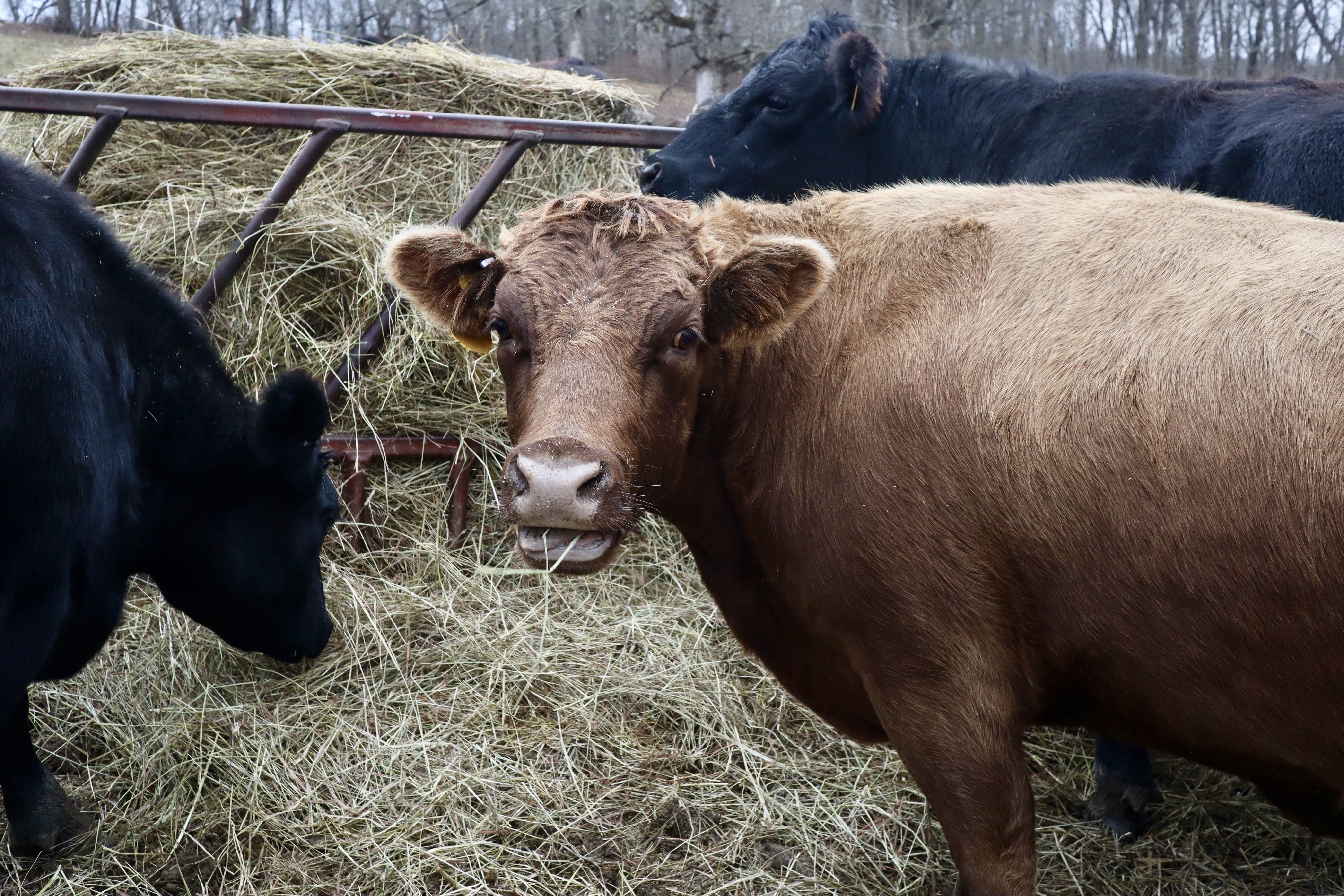 Seven of us met at 8am at the barn, bundled to keep warm in the below-freezing weather. A truckload of hay had just arrived and unloading small bales is labor-intensive, best done with a team. We stood around the loft of the old barn while the truckload of bales backed into the entryway and the hay elevator (essentially a long conveyor belt) was set up. Soon bales were coming down one after the next and we needed to move quickly to keep up. Small hay bales are held together with twine or thin wire. Unlike large bales that can only be moved mechanically, small bales are moved by gripping that twine under your fingertips and using it to lift the 40-60 lbs of tightly packed grass. The seven of us started weaving between one another, taking turns lifting the bale at the end of the conveyor belt and carrying it to the back of the loft where the stack was quickly growing. We organically formed a small assembly line, heaving the bales up to someone standing on several, who would then lift it to the top of the pile. After just a few minutes, jackets, hats, and sweaters were removed, the work warming us on a cold January morning.

Here in the Northeast, cattle and other ruminants are fed hay for about half the year, usually November through April. When we imagine pasture-raised animals, the image that comes to mind is one of cows eating green growing grass. But that is only half the story, for the other six months of the year their diet is primarily dry hay, and the quality and quantity of hay is critical to the health of those animals—impacting everything from their fertility and reproductive health, to pest and disease resistance, to how fast they grow and put on meat.

This year there is a hay shortage in the Northeast, partially due to a wet and cold spring leading to an abnormally dry summer. At Glynwood we don’t make our own hay, but rather rely on local suppliers. While there are a lot of advantages to making your own hay (control over quality and quantity), there are also benefits to purchasing winter feed. If you aren’t making hay, you can devote more of your pastureland to summer feed and support more animals. Perhaps most significant, harvesting hay removes a tremendous amount of fertility from the land and brings it to the location where it will be consumed. Purchasing hay from another farm is equivalent to importing huge amounts of nutrition onto your farm in the form of protein and energy. Of course the farmer selling the hay will need to find creative ways to replace their lost fertility, and hopefully that is done in a thoughtful way.

Making Hay when the Sun Shines

Hay is an encapsulation of summer, of the grass and legumes when they were at their best. Making good hay requires careful timing, lots of equipment, long days, and a bit of weather luck. High-quality hay is cut at a very particular growth stage, when the grass is about boot height—in this part of the country that is usually the middle to end of May, depending on the particulars of the field and the rainfall/snowmelt of that spring. Weather dictates when hay can be cut—for dry hay it is ideal to have three full days of bright sun, no precipitation, and a light breeze, just at the time when the forage is ready to be harvested. The three days are for proper drying of the hay in the field before it gets baled.

Cutting hay first thing in the morning, but after the dew has evaporated, allows it to take advantage of a full day of sun. After it is cut it doesn’t just sit there—farmers must spread out or fluff up the hay to promote drying. A tedder or mower-conditioner can be used to fluff the hay up; often a field of hay is worked several times throughout its drying period before it is moved into careful rows (using a hay rake) and then baled and hauled from the field to storage. Tedding hay on a sunny day can be uniquely satisfying; you can almost see the moisture leave the forage as it flies through the air and lands in loose airy piles. An unexpected summer rainfall during this drying period can spoil a whole crop of hay, and cause that hay to be relegated to mulch or bedding.

In our region, farmers can typically take three cuts of hay off a field each season, with 30 to 40 days between the cuts. The time between cuts of hay is a delicate balance of vegitative growth—quantity vs digestibility. Taller forage will lead to higher quantity of stored winter feed, but the higher lignin content of tall forage can lessen digestibility and nutrient content. Hay isn’t cut right at ground level, but rather about four inches from the ground. Leaving some above-ground biomass provides the energy for regrowth. The four inches of stubble grass also keeps the newly cut hay off the ground which helps it dry.

Hay that is baled too wet is a dangerous proposition: it can cause mold inside the bales which will damage the nutritive quality and in the worst cases it can combust as it decomposes. I have watched a load of hay burn and can attest to how quickly it goes up in flames, something no farmer ever wants to witness, particularly if the hay is stored in an old barn.

Testing forage is an important way for farmers to learn the quality of their hay (protein content and energy). Dairy cows require the highest quality forage because lactation places high nutritive demands on their bodies. Beef cattle and other ruminants can consume lower quality forage, but the protein and energy levels will still impact their health, just as any feed does. For those curious about evaluating hay quality, this guide is a good introduction.

You have likely seen large hay bales wrapped in plastic—the infamous gigantic marshmallows that line fields throughout the Northeast. This is baleage, or fermented hay. It is cut and raked and baled in just one or two days to intentionally preserve some moisture, and then it is wrapped very tightly so that it can ferment. There are many reasons to make and feed baleage instead of dry hay, but one significant reason in this region is that it is easier to find one to two days of no rainfall during our humid Northeast summer months than three full days. Glynwood doesn’t currently feed out any baleage, but during a hay shortage year like this one, our Livestock Manager is looking for any good feed she can find, and would consider feeding baleage if it is available.

All of us at Glynwood were glad to receive this particular load of hay, and unloading it together was a grounding way to start that early January day. When the truck was empty and the stacks of hay filled the barn loft, we stood back and took a deep breath to admire our work. Once you slow down, you start to notice the hay bits in your boots, your hair, and somehow under your shirt. Like sand on a beach, the hay seems to make it everywhere. One of the livestock farmers looked at the stack and said, “now I’ll get to move this all to the animals in the new barn, bale by bale”. Yes, unloading is just one step in the process of moving this feed from the field to the animals, whose bellies it will fill until the spring grass arrives. There is more information about the Glynwood farm and livestock operation here, including how and where to find our products.