From City to Valley: Reflections from Phoebe Leon 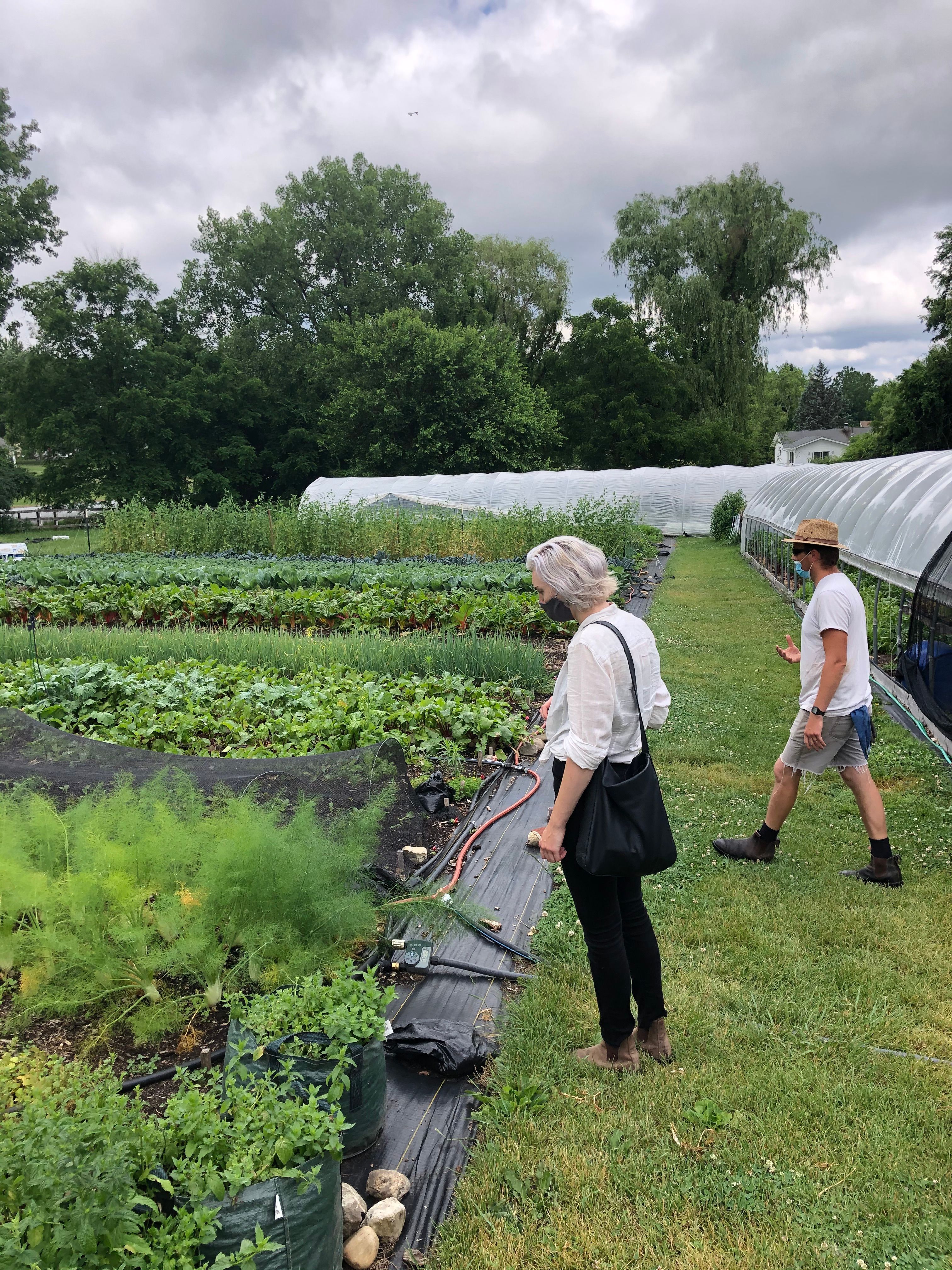 “Are you willing to go live on a farm right now?” Mike Anthony, my former boss and Head Chef at Gramercy Tavern, asked me about eight weeks ago. I couldn't think of a reason not to go. I had been laid off along with thousands of others in the restaurant industry a month prior and it was becoming clear that New York City wasn’t going to be the same for a long while. I understood that my time at Gramercy Tavern was going to come to an end, but I had unfinished business.

Chef Mike Anthony peeled back the curtain for his cooks, allowing us to see and understand that we are part of a larger organism and that we are in a fortunate position. He is able to utilize the Union Square Greenmarket and a large network of local purveyors so that our food tastes like New York City, the Hudson Valley and Montauk all at once. Our sous chefs would travel and bring back with them inspiration, new techniques and flavors, and would apply them to the produce we saw all of the time in our walk-ins. We learned that sense-of-place comes in many forms, that part of being in New York was the freedom to challenge the traditional.

Two years at Gramercy Tavern and I had only scratched the surface of understanding that network- yet I was hungry to learn more. Enter Glynwood. Last year Mike was invited to Glynwood’s farm to serve a farm dinner for Cider Week Hudson Valley. He brought with him two sous chefs, several cooks (myself included) and front of house staff. After a weekend on the beautiful property drinking cider, cooking and serving, moving cows and a late night encounter with a sheep, I knew I wanted to come back.

The circumstances that have led me to spend the past five weeks here are not ideal, of course. But I am fortunate to be able to continue my education on the Hudson Valley’s food system, food accessibility and food justice. As a cook, I interact with a lot of produce, but in the context of a restaurant’s walk-in. As a born and raised New Yorker, my senses aren’t honed to what those vegetables look, feel, smell and taste like when they are still in the ground. What do they need? What is the land telling us and how will it communicate that? Why are the cucumbers at the top of the property thriving while the others in the greenhouse became sick?

Even more foreign was livestock farming. The line of communication between farmer and animal is more direct than I imagined. The flock of sheep will “Baahhhh” at you when they’re expecting food. The goats will break free and show you where they are more comfortable. The cows will come when you call them. For the cook, that gap is larger with livestock. We only see the animals once skinned and bled. Ashanti, Glynwood’s livestock apprentice, and I discussed the importance of getting to know an animal to be able to honor her, to thank her. How do you know when she’s sick? How will this determine where the herd is pastured next season? How do different behaviors impact the land? I came to the conclusion that forming a bond with an animal can actually help one to better honor it when the time comes for it to become food. That acknowledging that food was a living being allows the consumer to contextualize their own role in the food system.

Along with learning how to direct my senses towards the Earth, I have been able to visit many different  operations of different scale and missions within the Hudson Valley, learn more about food justice and what steps we need to take in order for it be achieved, and better understand the role farms will play as we navigate uncharted waters. I have also had the privilege of being able to feed farmers, residents of the farm and the young organizers of Beacon4BlackLives.

As my time at Glynwood begins to come to a close and I return to New York City, a prime example of how food accessibility is not defined by proximity but by wealth and social value, I am thinking about my own mission. Restaurants are in disarray and will be for some time. Fine dining is not going to be as common and will likely become a facet of the industry that encourages and widens the food access disparity. I love cooking at fine dining restaurants, but I now realize my skills will be more useful to fuel and support the Black Lives Matter movement. America’s food history and industry is deeply entrenched in the exploitation of Black people and it is my duty as a member of the food community to acknowledge that and help seek the justice deserved. Food was never a luxury, it is about survival. I believe for our country and community to survive, restaurant workers--especially those with high skill levels--need to feed those at the frontlines of change, allowing our BIPOC leaders to lead. Our industry is facing its own crisis and there are more unknowns than ever. Fine dining has the longest road to recovery, maybe not financially, but it is a space that needs drastic reform in terms of accessibility and inclusion. If the fine dining community wants to be a part of the much needed systemic change, the workers need to demand that that happens. Our restaurants are only just starting to open our doors and rehire. Many highly skilled cooks are still unemployed. We have the time, we have the hands.

The time I’ve spent at Glynwood has allowed me to come to this conclusion and better understand the system that needs to be harnessed in order to make food more accessible to those most in need, especially during a global pandemic and the most important political movement of our time. It has given me context to the hard work put into getting the product I have been so fortunate to work with at Gramercy Tavern. It has shown me the blind spots that chefs have and those that farmers have and how we can better that line of communication. Most drastically, it has allowed me to translate my senses to a different stage of the food cycle and learn how to better communicate with the land and livestock.